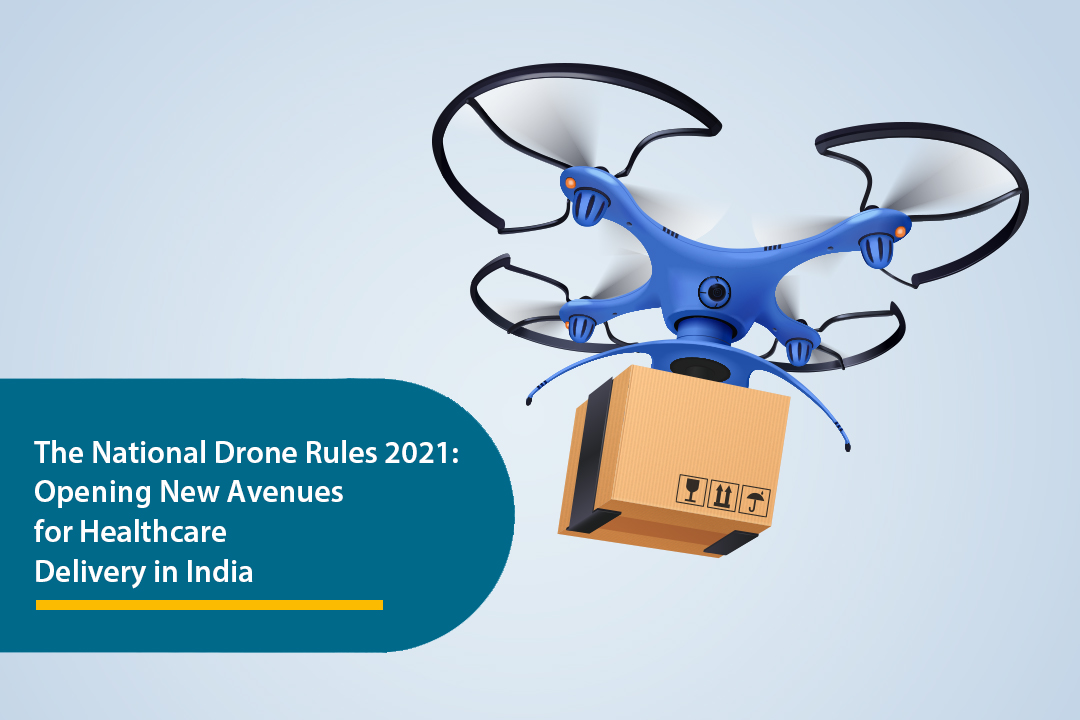 According to a report by the EY and FICCI, the Unmanned Aerial Vehicle (UAV) market in India is expected to reach $885.7 million by 2021. With multiple uses across different sectors, the future of drones in India looks promising and rewarding. To further encourage the growth of this sector, the government of India recently introduced the new “Drone Rules 2021” that aims to make it cheaper and easier to operate drones in India. The liberalised version of the new drone policy has come up with many approvals and nixed certain issues that were quite evident in the UAS Rules 2021.

Introduced in July 2021, the new drone rules come with a host of opportunities especially in an age ruled by digital technology. As per the new policy, coverage of drones has increased to 500 kg from 300 kg. Also, approvals that were required previously like unique authorisation number, certificate of conformance, certificate of maintenance and import clearance, unique prototype identification number, remote pilot instructor authorisation, operator permits, acceptance of existing drones, etc. are no more required for drone operators.

The government has also proposed the setting up of a Digital Sky Platform that will act as a single-window online system with minimum human intervention. The majority of the permissions can be self-generated within the platform which will assist operators to do away with bureaucratic rubber stamp culture. Still, in the development phase, the Digital Sky will provide an interactive airspace map with green, yellow, and red zones that’ll allow drone operators to plan their flights within safe corridors.

The new rules also state that no flight permission is required till 400 feet in green zones and up to 200 feet in the area within 8 to 12 km from an airport perimeter. The Yellow zone has been reduced from 45 km to 12 km from the airport perimeter.  A security clearance is no more required for registration, license. Also, there is no need for a pilot license for micro-drones as per the new policy. Other than that, foreign companies registered in the country are allowed to import and operate drones, and their parts will be regulated by the Directorate General of Foreign Trade.

Built on trust, non-intrusive monitoring, and self-certification, the reformed rules aim to strike a balance between safety and ease of operations. The new rules for operating drones are all set to tremendously help businesses, start-ups, and employees working in the sector. It will open a multitude of possibilities for innovation & business.

Drones can be a Big Contributor to Healthcare in India

Though India is regarded as the ‘pharmacy of the world’ yet in many remote parts of the country, access to basic healthcare is missing. Due to topographical constraints and poor transport connectivity, accessibility to healthcare is a distant dream for many especially with the onset of the COVI-19 pandemic. That is where drone-based healthcare delivery can play a crucial role.

Delivery of vaccines and medicines can be made more accessible and quicker with drones to the remotest corners of the country as well as hazard-prone areas. The use of drones will lead to more rapid administration of medications. Also, healthcare professionals will be able can work more efficiently as supplies can be summoned to the bedside instead of wasting time to gather necessary items. As orders can be placed through digital platforms, medical drones equipped with supplies tailored according to the situation can be quickly deployed to save the lives of patients in critical conditions.

Drones can also come to the aid of healthcare workers while delivering human organs for transplant. While there may be plenty of donors to meet the requirements, what often becomes the problem is that available organs often don’t reach desperate patients. Drones can be viable in transporting organs like kidneys, lungs, heart, etc. to donors before the window of opportunity runs out.

Drones are about to change the face of healthcare delivery in the near future. In many parts of the world, drones are effectively delivering biologicals like serums, blood, viral culture, vaccines, and organs safely and securely which is helping save millions of lives. With its empowering policy on drone operation in India, it is only a matter of time before drones become mainstream and an integral part of healthcare delivery in India.

Medical Devices to boost ‘Make in India’ for the world

COVID-19 Pandemic and the rise of Telemedicine